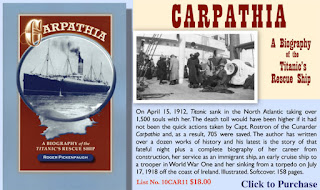 As many of you will remember about a year ago, M. Russell Ballard spoke in General Conference and encouraged members of the Church of Jesus Christ of Latter Day Saints to “stay in the boat and hold on!”  His call was part of an effort by LDS leadership to stem the flow of members who are leaving the LDS Church.   Many talks in General Conference in recent years in one way or another have been devoted to this effort.  His call was of course met with dueling internet memes.   Those like Mormon Women Stand, who wanted to share his clarion call with their fellow saints put out the following meme: 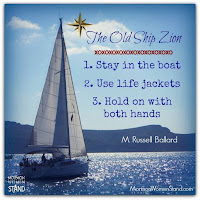 Others with a completely polar view of the LDS Church created their own opposing meme:

Of course, neither meme (as with any analogy) is perfect.   There are times when one must abandon ship to preserve one’s life.  And not everyone spends their entire life at sea.   In addition, the first meme leaves out the many who are no longer in the ship BUT did not want to leave the ship.  Rather were made to walk the plank (so to speak) facing charges of apostasy or others who were shunned by family and friends that could not understand or tolerate their views, questions and life decisions and wer thus metaphorically kept out of the ship.   The image also leaves out others who intentionally jumped out of the ship into the terrors of the unknown ocean obviously preferring to brave that, than to continue with the “Old Ship Zion” or what they saw as the HMS Titanic.

While those who posted this second image tend to view the LDS Church as a sinking ship, it ignores the fact that even though they may have jumped ship, according to the meme, those people are now either in a small life raft or wading in freezing water.  Most members to this day still do not appreciate how difficult a choice that it was for them to abandon the “Old Ship Zion”,  they clearly no longer felt safe or welcomed there.   Many devout LDS members do not realize how terrifying it was and still is for many to have jumped ship…and yet, they did so precisely to save their own lives.   Nevertheless, every one of them is happier to be where they are in spite of the dangers than back on the ship.

But with the image of people from the Titanic out the in cold waters still fresh in our minds, let us remember that along came the RMS Carpathia and plucked the survivors from the sea.

I recently attended a Sunstone Conference at Kirtland Ohio.   It was a tremendously enjoyable conference and I was fed intellectually, spiritually, and socially.   I learned so much, was touched by the passion of the people there and the loving spirit shared by all.   In attendance at this conference hosted by the Community of Christ were members of the Community of Christ Church, members of the FLDS Church, active members of the LDS church who carried current temple recommends, progressive LDS members, inactive LDS members, members who had been excommunicated from the LDS Church and those who chose to have their names removed.  ALL of them were there enjoying one another’s fellowship and learning together about something every one of them had in common.  A Restorationist heritage.

Men were there with their husbands, women were there with their girlfriends.   Exmos and Actives embraced one another and were able to speak about Mormonism without any rancor but with love and respect.   Women conducted the Church service on Sunday morning.   A member of the Quorum of the Twelve of the Community of Christ humbly helped roll out video equipment and setup tables working hard behind the scenes to make sure everyone felt welcome and the conference was a success.   You would not be able to tell that he was any different than any of the attendees.  Despite the presence of some incredible intelligentsia, there were no rock stars, religious, academic or otherwise.

After the conference I asked some of my friends who attended what they thought was the best part of the conference. Without fail, they all spoke of the feeling of community, the feeling of being welcome and included.  They loved being able to discuss the history, doctrines, culture of the various different faiths that all shared a Restorationist heritage.  We all shared Kirtland.   And several of them said something that struck me quite deeply.   They said quite simply that they had found their tribe.   The USS Restorationist Heritage boat piloted by Sunstone came along and plucked them out of the sea and gave them shelter and community.   They had found a new boat.
I was so struck by that comment.   With my devout LDS friends, whenever we discuss the Church, there is tension…almost a need to prove that the other is wrong.  An invisible tug of war fraught with subtle judgement and sadness.   I have experienced outright judgement and condemnation by other devout LDS members.   To be fair, I can't honestly say how I have made them feel.   However, with progressive and post Mormon friends, some of them at times are more focused on anger and condemnation of the Church.   There is a visceral hate.  To be forthright, I do share some of their views, BUT I do not hate the Church.   I do not wish it or its members any ill, and believe in the sincerity and Christianity of its membership and leaders.  But I also share some of the views of devout Latter Day Saints as well and am proud of my Latter Day Saint upbringing and experiences.   I am passionate about that middle, but sometimes feel alone there.  So it was wonderful to be welcomed onto the SS Restorationist Heritage boat and be welcomed.

One of the presenters at the conference said something that hit home.  Mica McGriggs said in her presentation that there are primarily two major views of Joseph Smith.   One group practically has Joseph on a pedestal.  Everything he did was ordained by God even if we do not understand it.   Very little blame if any is placed at his feet.  Rather, judgement is levied against anyone who dares criticize him.   “Give Joseph a break!”   On the other hand, there are those who see Joseph Smith in the vilest of ways; as a pedophile, a con-man, and a liar….”evil” is his middle name.  She argued for a more nuanced view of Joseph Smith, as that of a man, one that includes both sides of good and evil and puts him in the context of the world in which he lives.  There were over 70 people in attendance at the conference and I’m sure 70 different opinions about the man called “Brother Joseph” yet we were all united by him, and were able to talk about him and his legacy freely, openly, in a spirit of love and understanding.   That spirit is what I seek.

From the Book of Mormon we get the following scripture:

2 Nephi 26:33 “…he inviteth them all to come unto him, black and white, bond and free, male and female, and he remembereth the heathen; and all are alike unto God, both Jew and Gentile”
I saw that scripture come alive at the Sunstone Conference.   The spirit of inclusivity, that everyone there were all alike unto God no matter where they were personally.   I find the scripture more interesting now that the scripture mentions Jews and Gentiles…showing people of different faiths and beliefs are also alike unto him.

In the Sunday morning church service, gay couples sat next to traditional couples.   Excommunicated LDS and resigned LDS sat next to active and devout LDS.  Community of Christ members were intermingled among them too.   We were joined by someone from the FLDS.   A woman presided over the services.   And of course, there were a few kids running around in the pews.  Every one of them, their heritage traced back to the man Joseph and to the Kirtland temple.  A shared love for the Restorationist heritage that we all shared.  We were all moved by the powerful sermon delivered by Jana Reiss and then the heartfelt emotions that were shared in the testimony meeting.

Finally, as my friend Brandt Malone so aptly stated “No matter where on stands on the religious spectrum, there is something very special about singing “The Spirit of God” in the Kirtland Temple.”

I too must heartily agree with Brandt’s statement.   Those who know me, know I love to sing.  When it came time to sing that song, I sung it with a gusto that I have not done in years.  But I couldn’t make it through.  I broke down in tears, my voice cracking, choked with emotion as I tried to make it through each verse.   Tears shed for what I had lost and tears shed for what I had found there in Kirtland.  The fourth verse of that song came true for me at the conference.   It was indeed a blessed day when the lamb and lion, the gays and the straights, the black and the white, the ex-mormons and devout Mormons along with those from the Community of Christ and the FLDS; we all did indeed lie down together without any ire.