Are We Spiritual Vegetarians? 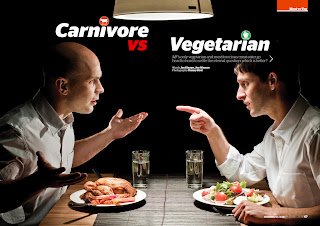 I have begun to wonder if some of us as Latter Day Saints are spiritual vegetarians.   Countless of times since my youth, I have heard the teaching that we should focus on the basics of the gospel and that we should teach milk before meat.   I agree with those concepts.  But when do we ever get to the meat?   Is there ever a time to enjoy a spiritual steak?   I don’t remember a teaching anywhere that said that we are not supposed to eventually get to the meat.

In the April 1984 General Conference, Boyd K. Packer made the following comment:  “…As the scripture say, they must have milk before meat.  But we must take care lest the only nourishment they receive thereafter is that broth.”

I completely agree with the concept of giving someone milk before meat.   That is how children are raised…starting off with their mother’s milk.  But eventually that child grows up and is weaned off that milk and more complex foods are introduced.   Meat is usually one of the last of the types of foods introduced.  Meat is tough and requires strong teeth for cutting and chewing in order to break it down enough to swallow so that the stomach is able to digest it and use it for the health of the body.  Meat provides the proteins and amino acids necessary to help one grow, build muscle, and strengthen the immune system.

It seems like some have taken the teaching of “milk before meat” to the point that meat is avoided altogether.    There can be some danger in this.

Investigators are taught the very basics of the Gospel.   Many are baptized without really having any idea the depth and breadth of Mormon doctrine to which they are committing.   For example, I know of a wonderful couple who joined the church relatively quickly…they went through the discussions, came to church, were fellowshipped and jumped in to the church.  In just a couple of weeks, they were aghast to learn that we actually believed that men and women could become Gods.   It was never mentioned in any of their missionary lessons.   They soon left the church over that doctrine and actually felt deceived that it was not taught to them before joining the church.  That is a meaty doctrine that should be fully digested before anyone commits to our church.

I know of another family who had no idea of the life changing commitment that it means to be a Latter Day Saint.   Being a good Mormon means commitment to time consuming callings, consistent home teaching, regular trips to the temple, missionary work, service projects, tithing, and other activities.   He had no idea when he and his family were baptized that being a good Mormon required one to do all those things.  Not long after I met him, I asked him why he no longer went to church (I met him long after his family left the church).   He said that one could be a good Christian without being a good Mormon.   He said that Mormons focused too much on all the tasks (as he called it) than on becoming Christlike. He complained that Mormons taught so much about the importance of family which appealed to him, and then gave him tons of stuff to do that took him away from his family.   In his bitterness (his marriage suffered from the experience), he called Mormons hypocrites on the family.

Investigators should understand the meat of the Gospel and what it means to be a Latter Day Saint before buying into it, committing to it and getting baptized.  Yet we often avoid all meat completely with investigators.   They should understand that meat.  It may mean fewer baptisms, but it will also mean a more prepared new member and fewer newly baptized members who go inactive so shortly after they join.

For long time members, the danger of avoiding meat is different.   The Book of Abraham is the source of some of the meatier doctrines of our faith.  It expounds more clearly than anywhere else our doctrines with regards to the pre-existence of man and the great council in heaven.   It discusses the priesthood and some have pointed to the Book of Abraham as the source for the doctrine excluding African Americans from the Priesthood prior to 1978.   Our belief in a plurality of Gods is clearly evident there from even a cursory reading of the Book of Abraham.  All of these things are unique to our faith.   Yet there are many long time members who do not know that the Egyptian papyrus that is the source of the Book of Abraham has been found.   Many others do not know that the papyrus has been translated and found to not even come close to matching the text as provided to us by Joseph Smith.    BYU scholars have conceded that point.   This question is actually raised in the July 1988 Ensign:   July 1988 Ensign I Have a Question.

This question posed a serious problem for a member of the ward in which I currently reside.   Over 10 years ago, this long time member of the church invited me over to their home because they had some questions.   I was able to answer many of their concerns, but then they mentioned the issue of the translation of the papyrus not matching the Book of Abraham.   I was surprised.  I did not know.  I had not heard of it.   I was unaware that the papyrus existed and unaware that the translation did not match.  In their letter of resignation from the church, they cited their experience with me as one of the reasons for leaving the church.   Not only was I unable to answer their question, they were shocked that a leader of the church (I served in the Bishopric at the time) would be unaware of issues surrounding a fundamental book of scripture of the church.  Knowing some of the things that bothered them, I know that if those issues had been discussed in church or some other church setting, that many of their concerns would have been resolved and they would still be members of the church.  That piece of meat was never served in church, it was avoided.   Instead, since all they ever had was milk in their decades of experience within the church (everyone’s experience is different), they simply could not digest the meat when it finally showed up in their lives.

We all are different.   We have different priorities.  We are touched by different things.   Things that may be important to use, may not be to others.  We feel the Spirit differently in our lives.   We have different challenges and have different temptations.  This is why the injunction to learn line upon line, precept upon precept is important.   For each of us that path is different.   Yes, we do need to be fed milk before meat as a child does before becoming a teenager or adult.   But growing line upon line means that eventually we must be ready for meat.   We must grow up and become spiritual adults.  As Elder Packer said, “..we must take care lest the only nourishment they receive thereafter is that broth [milk]”

Avoiding meat may cause some spiritual health problems.   As meat helps our bodies grow, gain muscle and improve our immune systems…we eventually must be ready to handle that spiritual steak.   Spiritual steak will help us grow spiritually, strengthen our spiritual muscles, and improve our spiritual immune systems.   But spiritual steak is tough, takes more time to chew and break down (in other words ponder and question), before we are ready to swallow it allowing our stomachs to then digest it and take advantage of its benefits.   Of course spiritual meat takes more time and effort.

Now let me say…there are some who choose to be spiritual vegetarians…there is nothing wrong with that path.  Some have decided that they do not need or want meat in their diet.   Jesus had no problem with Thomas’ desire for more meat wanting to actually touch and feel the resurrected Christ.  He responded to Thomas’ challenging questions.   Others, did not need that in their diets. They never saw or touch the resurrected Christ, but they believed – blessed are they.

Some people believe that we all should be spiritual vegetarians and should never partake of the meat.  They may not realize that they are promoting that.   But, they immediately turn to the phrase “milk before meat” anytime a doctrine that is meaty and much tougher to chew than milk comes up proclaiming even strong active members of decades and generations as potentially unready.    Some of them have even become critical of the “meat-eaters” focusing on all the risks of eating meat completely ignoring all the benefits of it.  Yes, there are risks of eating meat.   But there are risks of remaining a vegetarian as well.   Shall we just starve then to avoid all risk?
The point is once again, that we all have different paths to strengthen our faith and testimony.   Each of us learns and grows differently.   Some have chosen to be vegetarians and completely avoid all meat.   Others are meat eaters.   One is not better than the other.  The debate between real meat eaters and vegetarians is just as intense as the debate between spiritual meat eaters and spiritual vegetarians.     Luckily, Christ accepts and feeds them both.

The challenge here is in the world of the internet and a media focused on exploring a Mormon Presidential candidate’s beliefs in depth…the meat of Mormonism is now being trumpeted for all, Mormon and non-Mormon alike, to see.  Whether or not we are ready for meat….it is being served.   I like mine medium well.