The "Luther Effect" Today in Mormonism 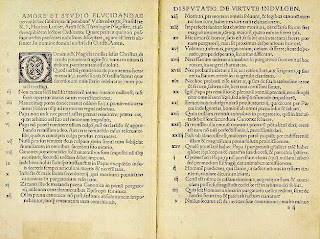 
A few months later, friends of Luther translated his pamphlet, 95 Theses on the Power and Efficacy of Indulgences, from Latin into German.  With the help of the Gutenberg printing press invented less than 70 years earlier, thousands of copies of the pamphlet soon found themselves widely circulated in Germany.   Within months, the pamphlet was being circulated widely throughout all of Europe.   Soon, students and many others flocked to Wittenberg to hear Luther speak.


What was the ruckus all about?  Luther had no intention of confronting the church but saw his disputation as a scholarly objection to church practices.   His writing was considered scholarly, asking questions seeking understanding rather than being confrontational.   However, an undercurrent of challenge can be detected in some of his theses.


His biggest problem with the Roman Catholic Church at the time was that a financial transaction, “an indulgence” was required as a penance for sin rather than genuine contrition in order to be able to enter heaven.  The money raised from those indulgences was to be used to rebuild St. Peter’s basilica in Rome.


Indeed, Theses # 86 states, “Why does the pope, whose wealth today is greater than the wealth of the richest Crassus, build the basilica of Saint Peter with the money of poor believers rather than with his own money.”


What made Luther’s questions so powerful that it served as the trigger for the Protestant reformation?  He certainly was neither the first person, nor the first member of the Catholic clergy to have questions about church doctrine. (1)


I would venture to say that two things brought power to Luther’s question and creating what I call the “Luther Effect.”


1)   A legitimate question with no easy answer.   All the more powerful because it was a question about money and salvation each one in and of themselves a powerful force in the life of an individual.   His questions struck a chord with thousands who wondered the same thing, some perhaps who would have never had the courage nor the standing to raise the question on their own.  He was asking a question that he was not alone in wanting an answer.
2)   The Gutenberg Printing Press.   Luther’s disagreement with the church would have never gotten traction, most probably would not have resulted in such a widespread movement as the Protestant Reformation without the Printing Press.   Within months thousands of copies of his 95 Theses were translated into language easy to understand for the common man and disseminated widely throughout Europe.


We may not have a Luther in the world of Mormonism today, but there are legitimate questions about the church, its history, doctrine and culture. Who hasn’t been bothered about Joseph Smith’s marriages to women already married to other men?   Some have been bothered about gays and the Church. Others are bothered about reasons for the denial of the Priesthood to blacks prior to 1978.  For some the role of women in the church bothers them or the fact that the translation of the papyrus purchased by Joseph doesn’t match the Book of Abraham.  Most recently the multi-billion dollar investment by the church in the City Creek Mall has been bothersome to many.


But not only are there some legitimate questions with no easy answers, we also have a 21stcentury Gutenberg Press called the Internet.   Information about these questions and many more are being disseminated widely and instantaneously throughout the world and available to all with a simple click.  People are far more aware of these questions than ever before.


We have web sites with all kinds of information regarding the Church such as LDS.ORG and Mormon.Org.    There are sites that have been setup to attempt to explain many of the difficult questions raised such as FAIR or the Neal A. Maxwell Institute.


On the other hand, there are other sites such as MormonThink that have dared to tackle the many difficult questions and often coming themselves to unsettling conclusions.  The fact that they have come to an unsettling conclusion has had the site labeled Anti-Mormon by some.


Either way, friend or foe or somewhere in between, the result is that people are talking.   They are talking about the church, it’s history, doctrine, and culture in a way that has never been done before.   There is something called the “Mormon Bloggernacle” that has exploded with thousands of Mormons such as myself writing blogs who are sharing their thoughts and feelings about Mormonism from a wide variety of viewpoints.  The “Mormon Mommy Blogs” have even become recognized by the media as a powerful force operating in our culture today.


With a Latter Day Saint as a Presidential Candidate, the national media is writing about the church, its history, doctrine, and culture in a way unparalleled in the history of the church reaching millions with each keystroke even further stoking the fires of discussion regarding the church.


There is an interesting gamut of message boards where people in a certain stage of their faith can go on to find support.


a)   LDS.NET is a site for active members of the church who are still strong in the faith to discuss the many issues of the day and a wider range of issues related to being a Latter Day Saint.


b)   Faces East is a “forum to support LDS members whose spouses are inactive, disaffected or non-LDS. Our primary goal is to sustain and strengthen these marriages.”

d)   New Order Mormon is a forum for “those who no longer believe some (or much) of the dogma or doctrines of the LDS Church, but who want to maintain membership for cultural, social, or even spiritual reasons. New Order Mormons recognize both good and bad in the Church, and have determined that the Church does not have to be perfect in order to remain useful”


e)   Recovery from Mormonism  is a site mainly for those who no longer have testimonies, who have left the church and are transitioning away from a life of Mormonism.


There are thousands of Latter Day Saints and former Latter Day Saints posting on these sites every day.  Like it or not, the genie is out of the bottle.   Nothing is going to stop that discussion, if anything it will only continue to grow.   Our culture, history, and doctrine are being discussed in depth like never before.  Members and Non-Members alike are learning more about our church than ever before including little known parts of it.  And like it or not, thousands are asking questions.   Thousands are bothered by one aspect or another.


It seems clear that the Luther Effect is in full swing and gaining momentum in the world of Mormonism today.  But how powerful is that effect?    The Catholic Church survived the Reformation and the Mormon Church will survive its own challenge (though on a much smaller scale) as well.   The Catholic Church was, however, deeply impacted by the reformation triggered by Luther’s questions.   Let me offer a few points of consideration on the Luther Effect in the world of Mormonism today.


The internet really exploded on the scene and began to be generally used and accepted around the world in the mid-1990s.  It provided access to information about the church to the average member that previously was only available to scholars.   Here are some facts regarding the growth of the church since the advent of the Internet.

1)   Up through 1998, the church was adding 800-1000 new wards and branches every year.   Since then, the church has averaged opening just 259 wards per year, including three years when it opened fewer than 100 wards and branches in a year. In fact, the average # of members per ward has grown steadily suggesting higher inactivity rates.   (2)

4)       Finally, A General Authority has been quoted as saying that we are currently living in a time of the greatest apostasy from the church since the days of Kirtland. (3)


The church still grows.  But the trend of the growth of the church since the 1990s has certainly slowed tremendously.   That dramatic slowing in the growth of the Church coincides with the rise of the internet and later social media technologies allowing the dissemination and discussion of people’s legitimate questions on an unparalleled scale much like the Gutenberg press allowed for the dissemination of Luther’s pamphlet in unparalleled ways back in his day.


Those of us in the church today are probably experiencing a lot of what Catholics felt back in the 1500s when Luther's pamplet's started swirling around.  The Luther Effect is as powerful today as it was 500 years ago.


(1)Wikipedia is the source of my material related to Luther.


(3)Elder Marlin K. Jensen, a recently released general authority and church historian who was granted Emeritus status at the last general conference is the source of these comments.