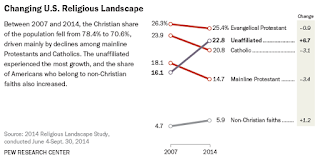 Today (May 12, 2015) the Pew Research Center released a demographic survey of America’s changing religious landscape examining demographic changes for US religious groups from 2007 to 2014.   I am providing a link to the survey results published by Pew here.

All I have done was just to pull out of the survey all of the statistics that are directly relevant to Mormonism.  If you wish to see how Mormonism demographic statistics compare to other religions you should follow the link to the PEW survey and look at the tables they have published.

The demographic results specific to Mormonism are below:

SEXUAL ORIENTATION
·         1% of self reported gays, lesbians or bisexuals in the US consider themselves Mormon