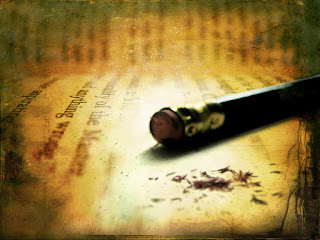 [Update:   Originally, this blog post posited that Bill's participation in a FAIRMormon conference was deleted due to his coming out in opposition to the recent policy change by the Church regarding those engaged in same sex marriage and their children.   That does not appear to be the case.  It was pointed out to me yesterday by commenter Andrew Miller, that according to the internet archive records, that the deletion of Bill's participation specifically in panel discussion at that conference regarding 'The Loss and Rekindling of Faith" back in 2013 happened before the announcement of the policy change by the Church. Therefore the two could not have been connected.  Also, it should be noted that in several places at the FAIR website, Bill's name is listed as a speaker at the conference, nevertheless all of his comments at the conference were still deleted.  In light of this, I have modified my blog post so that I no longer make a causal relationship between the policy change by the Church and the deletion of Bill's participation in that panel.]
------------

Bill Reel is a former Bishop for the Church of Jesus Christ of Latter Day Saints and still a very active member of the Church who holds an active temple recommend.   Like many members of the LDS Church these days, he experienced his own faith crisis as he learned about many of the issues being discussed today, some of which are topics of the essays recently published by the LDS Church.

As a Bishop, Bill grew an especial love for members of the Church and helping them through the many different challenges that life provides.   A faith crisis is one of them.  He saw enough of these happen that he wanted to so something about it.  He wanted to help.  So he created a podcast: Mormon Dicussions; Leading with Faith.. where he takes an unflinching look at those issues, but always from a positive perspective and with the goal of supporting and strengthening the testimonies of members of the Church.   It was not long before Bill gained his own following.   His focus on strengthening testimonies earned Bill an invitation to the 2013 FAIR Mormon Conference.   "FairMormon is a non-profit organization dedicated to providing well-documented answers to criticisms of LDS Doctrine, belief and practice." (from FairMormon website)

From FairMormon's own website with archives to its various conference, you can see that Bill was invited to be the moderator for a panel discussion on the topic of "The Loss and Rekindling of Faith"  Here is a screenshot, his name is at the very bottom. 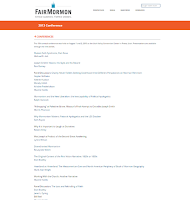 Yet, when you look at the current transcript of that session that FairMormon has posted.   It gives the impression that Bill did not participate, didn't speak, and wasn't even there.

Here is a link to the official transcript of that session as posted by FairMormon at their website: You will note that FairMormon does note at the top of the transcript that the content has been edited.

(I do have a screenshot of that page in case it changes again.)

Bill's comments and participation in that conference had been available until recently. But in the transcript, the image of him his gone and every single one of his comments erased as if he wasn't there.  It was only recently that Bill participation at the conference was whitewashed.  First of all, the image at the top of the page showing him moderating the panel discussion is gone.   In the originally published transcript, anytime Bill spoke, his name was listed as well as his complete question.   Now, Bill's name has been completely pulled as the person asking questions of the panelists.  It does not seem like Bill was even present during that panel evne though he led the panel and was the one asking questions of the panelists.   His questions are still shown in the transcripts, but those questions have all been edited and are very watered down versions of the questions he asked.  The context and background he provides before asking the questions is the main thing that has disappeared.  What happened?  Why the change?

The facts as so far I can tell, is simply that we do not know.   FairMormon gave no explanation as to why Bill's participation was deleted.  FairMormon did not inform Bill that they intended to delete his comments as Bill was unaware anything had changed until recently, weeks after the change happened.   No explanation other than to note that the transcript had been edited without saying what had been taken out and why.

Let me be clear, Bill still is an active member of the Church.   Still supports the prophet of the Church.  Still believes in the Book of Mormon. Still ardently defends the LDS Church against criticisms of it, but with great respect for those who question.

Yet, this great Mormon defender has been whitewashed by the most well known Mormon apologist organization.

Here is a link from the internet archive showing the transcript of that session with a picture of Bill at the podium and all his remarks included.

Perhaps FAIRMormon had become uncomfortable with Bill in recent months and did not want Bill's name associated with FAIR.   I don't know and can only speculate.   To some, that discomfort may be understandable.   But is altering their own historical record of a conference the right course of action for an organization the professes to make sure that LDS history is viewed accurately?  Such an action undercuts everything that FAIRMormon supposedly stands for which is an accurate portrayal of LDS history, doctrine, culture.  If FAIRMormon is willing to do this with their own historical records, how can any one trust anything they write as being complete and accurate and most of all "fair"?

Assuming Bill did indeed fall out of favor with FAIRMormon and the organization did not want Bill's name associated with FAIRMormon; in such a case, an action that would have been more historically accurate, more honest, and frankly showed more integrity would have been to keep the record showing accurately what was said at the conference and by whom, but then to add some kind of notation at the beginning or the end stating that Bill's current views are no longer in line with those of FAIR and that any of his comments should be read with that in mind.

Instead, for a group that as an integral part of its various defenses against LDS critics argues that we should  look at the whole context of a situation, that all the information should be considered, has now engaged in not providing the entire context, and intentionally excluding information and background without providing any explanations.

For a group that defends the LDS Church against claims that it has hidden its history, it has just engaged in some history hiding itself.