Ignoring the Stupor of Thought 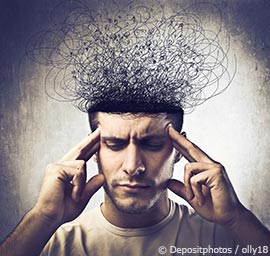 Recently, a devout LDS friend of mine made the comment that he most certainly would have some tough questions for God once he got to the other side of the veil.   Many of my LDS friends have made that exact same comment or something similar along the lines that they have a list of questions they will be asking God when they see Him on the other side.

Others have simply made the remark that we should be patient, we might not understand things now, but eventually, the reasons will be revealed to us.   It’s as if there are millions of members waiting for a huge explanation, a momentous “aha!” that is coming sometime in the future, or after they die that will explain everything that currently is not making sense to them.    For many, there is some doctrine, some policy, some item of history, or perhaps some personal event or tragedy that they simply do not understand, but their loyalty, their testimony, and their obedience to follow the prophet is too strong to even contemplate doubting.  So in an act of great faith, they lay their question aside and decide to either wait for God to answer those questions in His own good time or confront Him when they meet Him after death.

Why have they chosen to put whatever question they have on the shelf?  Is it because the facts are uncomfortable?   Is it something for which they have not received answers to their prayers? Does the most obvious answer seem contradict their current beliefs? Regardless, some item is causing them mental stress and discomfort.  It doesn’t sit well with them.  This information conflicts with their existing beliefs and values.   That conflict is something that today is called cognitive dissonance.
Since, something isn’t sitting quite right with them, in what they see as an act of faith, they choose to ignore it.  The General Authorities have counseled in these moments to have to do exactly that.  Though ignoring the troubling item is not described as avoiding a difficult question, rather it is described as an act of faith.  This is exactly what the LDS General Authorities have taught.  Pres. Uchtodorf in the October 2013 General Conference famously told members to doubt their doubts not their faith.   Elder Neil Anderson in the October 2010 conference told members “Will we understand everything?  Of course not.  We will put some issues on the shelf to be understood at a later time.”  Additionally, like a couple of my devout LDS friends, many members on their own simply give up and say that they intend to wait until after death to ask God.

My question is do they really think that God is deliberately not answering their question?  If so, why? The scriptures might say that God’s ways are not man’s ways, but where in the scriptures does it say that He will NOT answer their prayers?   Is this truly some kind of modern day Abrahamic test to see if we can stomach what appears like God commanding Joseph to be eternally sealed to an already married woman?  Where in the scriptures does it teach that for some questions we will have to wait until after we die to ask God?

The scriptures are replete with examples and exhortations to bring your questions to God and that he will always answer. Do we all of a sudden no longer have faith in the promises of the scriptures?

Matthew 7:7  Ask, and it shal be given you; seek, and ye shall find; knock, and it shall be opened unto you
Luke 11:9 Ask and it will be given to you, seek and you will find, knock and will be opened to you
John 16:24   …Ask and you will receive…
Matthew 21:22  And ALL things, whatsoever ye shall ask in prayer, believing, ye shall receive.
Mark 11:24 All things WHATSOEVER ye pray and ask for believe that ye receive them, and ye shall have them
John 11:22  But I know, that even now, WHATSOEVER thou shalt ask of God, God will give it thee
Moroni 10:5  And by the power of the Holy Ghost ye may know the truth of ALL things
James 1:5  If any of you ask wisdom, let him ask of God, that giveth to all men liberally, and upbraideth not; and it shall be given him.

Joseph Smith believed that God would answers his prayers challenging the existing beliefs of his day.   He believed God would answer his tough questions.   He prayed and he got answers, why can’t we?  Why must we wait until after we die to ask of God?  Why have we come to believe that God will not answer some of our questions even though the scriptures reassures us time after time that he will answer ALL of our questions.  God even said that he would NOT upbraid for asking the question.   Rather, if we believe in God, then we should believe that he will answer our prayers as Joseph did.

My contention is that God HAS answered those prayers.  We just don’t like the answers.   The problem is that the answers we do get when those difficult questions are asked, explored and prayed about do not fit our preconceived notions of what we believe.  The feelings we get in response to contemplating that topic contradict some fundamental premise that we are unwilling to challenge.
So we ignore that answer, and say, “that can’t possibly be it.”  We then take the position that there are some questions God will not answer. We think that God is withholding understanding from us as a test of faith.

So subtly, unknowingly, we have come to NOT trust the promises in the scriptures that say that God will answer all our questions.   We do not trust that he will answer us, we do not believe that he will answer, that for some reason he won’t give us an explanation, or that we are not worthy to receive one.

We have given up believing that will receive the revelation on those particular questions.   We do not trust or believe that the Lord will lead us to a solution.  At least not in our lifetime.  So we must wait until we meet him in person after we die. In my simple mind though, trusting God does not mean, NOT asking God.

I’ve personally come to the conclusion that in reality God has answered those questions.  We reject them because the problem is that it does not fit our preconceived notions of what we believe.

D&C 9:8 But behold, I say unto you, that you must study it out in your mind; then you must ask me if it be right, and if it is right, I will cause that your bosom shall burn within you; therefore, you shall fee that it is right

What everyone is experiencing is quite simply a stupor of thought or in more modern terms as mentioned previously, cognitive dissonance.

The scripture says that when one experiences a stupor of thought, it will cause them to forget the thing which is wrong.

In exploring the definition of the word “FORGET” I found that among the meanings of that term are also the following:  “To omit mentioning, to leave unnoticed, to take no note off, to neglect willfully, to cease or to omit to think of something, to ignore”

In other words, my devout LDS friends who are waiting until after they die to get an answer from God because they can’t seem to find one now are actually doing exactly what the scripture says when they choose to ignore the how they feel about a topic.   They are doing exactly what the scripture says that they would do if the thing being prayed about was wrong.   They are FORGETTING it.  Ignoring it.   They prefer to omit mentioning it, the cease to think about it.   They prefer not to think about it, they put it in a mental box or shelf and say they will wait until they can talk to God in person.

But in doing that they fail to recognize that God has answered their prayer.  He has just told them that “IT WAS WRONG.”   That is exactly scripturally how He said he would communicate that something is wrong. But we don’t like that answer. It does not fit our existing beliefs.   God has sent them a stupor of thought and the desire to forget in accordance with scripture.   Instead, some of those devout members choose to ignore that stupor of thought, choose to ignore the answer that God has given them in the manner He said he would give it to them. Rather, they choose to wait for God and hold out hope for a better answer that will somehow fit what they believe now.  They call that an act of faith in God, when they are in reality ignoring God speaking to them now who has responded to their prayers and questions, but with an answer that doesn’t fit their existing beliefs.

Trusting god means trusting the answers he gives us, not ignoring them when we get the stupors of thought.

There is a famous parable of a man who is on the top of his house, with flood waters engulfing his home and rising.   He prays to God to save him.   So God sends someone in a canoe to save him.   The man waves him off, saying he is waiting for God to save him.   The waters rise even higher, and the man is forced to stand at the highest point of his home with water up to his chest.   A helicopter comes by and drops a ladder to him.   The man waves him off.  His faith is so strong that he says he will wait for his God to save him.  Sure enough, the man drowns.  When he gets to heaven, a bit upset he has a talk with God.   Why did you not answer my prayers?  I was in danger and you did not save me!   God gently answers: “Did I not send a man in a canoe and a helicopter with a rope ladder to save you?”

Joseph Smith in his revelation recorded in D&C 9 brilliantly described cognitive dissonance, the stupor of thought, as an answer from God.   It is how he tells anyone who prays if something is wrong.

“If it is right, I will cause that your bosom shall burn within you; therefor, you shall feel that it is right.   But if it be not right you shall have no such feelings, but you shall have a stupor of thought that shall cause you to forget the thing which is wrong.”

When we get that stupor of though when praying over something particularly difficult, God HAS answered our prayer.  It may not fit our view… but God is answering.   Are we listening?  Or will we be in for a shock when we finally do get around to asking those questions after we die?

The only way we learn and grow is to be unafraid to ask the questions that are truly burdening our heart and be prepared for answers we might not like.  Avoiding those tough questions and avoiding the unpleasant answers is avoiding our relationship with God, or at best, postponing it until it is too late.
Posted by myself at 8:34 AM