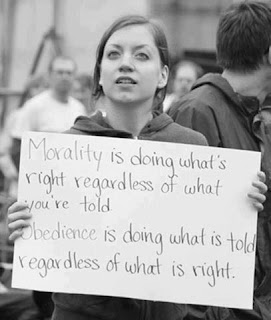 I have no idea who this person is nor why they are holding that sign.   But the words themselves I found incredibly thought provoking. It certainly appealed to my sense of having the courage to stand up for the truth.  That sense has been carefully fostered throughout my life as a Latter Day Saint.  Even recently that notion was reinforced with the talk by Thomas S. Monson encouraging us to "Dare to Stand Alone."

I recently posted the above image on my Facebook page and was interested to see if anyone would post any thoughts in reaction to it.   There was one comment from a friend that I found incredibly interesting.  He wrote

"...and obedience in the gospel is both, because you're told to do what is right and use your agency, regardless of what someone tells you to do."

His comment was "liked" by several people, and in many regards I do agree with that statement.  The gospel (which is the good news taught by Jesus Christ including an understanding of the atonment) does teach us to do what is right.  The consequence of this is quite simply to "choose the right when a choice is place before you."

However, as I mentioned in a previous post.   Many of us Latter Day Saints equate the word "gospel" with "the Church of Jesus Christ of Latter Day Saints."   I think many LDS when they read the comment of my friend actually do interpet it in that manner.  If we did that, the meaning of his comment would change:

"...and obedience to The Church of Jesus Christ of Latter Day Saints is both, because you're told to do what is right and use your agency, regardless of what someone tells you to do."

If this is the case, then I must respectfully disagree.   Allow me to provide a couple of examples:

This is a very sorry and terrible point in the history of our Church.  It is one that really is not studied much in depth in our lessons either at church or in seminary or institute.   Some will argue that Brigham Young was involved and approved the massacre, but that is a topic of heated scholarly debate.   Instead, I will stick with what is accepted by all scholars.   Isaac Hale and William Dame were two Stake Presidents who were the ones who provided the direction to the Latter Day Saints involved in the massacre.  Those Latter Day Saints involved in the massacre were being obedient to their Priesthood Leaders.  They believed that in being obedient to them, they were being obedient to Christ and to the Gospel.   They truly felt that they were God's instruments carrying out His will in obedience to direction from their Priesthood leaders.
This is one example where obedience to the Church and Priesthood leadership was not moral.  Standing up for the right regardless of what they were told, would have put these men who carried out the massacre in opposition to their Church leaders.   Yet, if they had had the courage to dare to stand alone, and to stand up for morality over obedience, and thus NOT be obedient to their Priesthood leaders, that massacre would not have happened, lives of innocent men, women and children would have been spared.  That massacre would not exist as a stain on the history of our Church as it does today.  The Church has since apologized for that event, but it's memory will continue to be one that we as members prefer to blot out, but whose lesson we must never forget.

2)  Levi Savage and the Martin and Willie Handcart Companies:

Levi Savage was someone who in the tradition of Thomas S. Monson who did have the courage to "dare to stand alone."  The Apostle Franklin D. Richards arrived at the camp of the pioneers and was told that Levi Savage had spoken up against continuing on in their journey west warning them that it was too late in the season and that the handcarts would get trapped in the Rockies.

Apostle Richards openly rebuked Levi Savage and promised the Saints that "...though it might storm on the right hand and on the left, yet the storms should not reach them. The Lord would keep the way open before them, and they should reach Zion in safety."

As we know, those faithful and courageous pioneers chose obedience to the Apostle of the Lord.   What followed was another great tragedy in the annals of our Church history.

Though publicly rebuked and humiliated, Levi Savage was right.   He nevertheless chose to go along to do whatever he could to help those Pioneers who he knew would be headed into harms way and whose path would not be safe as promised by the Apostle.   His presence on that trail saved lives.   Levi's own journal states

"What I have said I know to be true; but seeing you are to go forward, I will go with you, will help all I can, will work with you, will rest with you, and if necessary, will die with you. May God in his mercy bless and preserve us."

So let me return to the comment posted by my friend.   I will add this comment.  It is quite possible even within the Church of Jesus Christ of Latter Day Saints, that choosing the right may mean to not obey Priesthood leaders.  I am not advocating mass disobedience here at all.   I am not trying to imply that Priesthood leaders are always wrong either.   Rather, I am advocating against blind compliance and enouraging the use of our God given gift of Free Agency.

On the one hand, when attempting to explain some outrageous statements by past leaders, we use the phrase "they were speaking as a man and not as a prophet."  We will be the first ones to say that our leaders are human and not perfect.  I have known many very good men who have served as Bishops and in other Priesthood Leadership positions who will be the first ones to tell you that they have made wrong decisions during the time of their stewardship.   Yet, many of us Latter Day Saints also in the blink of an eye, wipe away all that humanity and often advocate unthinking and immediate obedience to anything that falls from their lips.

A phrase I have often heard is that "when the prophet has spoken, the thinking has been done."  Rather, I would argue that when our prophet has spoken that is when the thinking should begin if it hasn't been going on already. We should NOT ignore the free agency that was fought for us so hard in the pre-existence.   Rather we should use that precious gift of agency that was given to us by our Savior.   We each are responsible for evaluating those words of our priesthood leaders, pondering them, researching them, and obtaining our own testimonies of what they say. Then rather than being obedient to the Priesthood Leader....we should be obedient to what is right as the gospel teaches us.   Realizing that yes, on occasion, our human and imperfect Priesthood leaders just might be wrong.

Most of the Bishops that I have known personally are men that are humble enough that they would have appreciated someone having the courage to tell them that something they said or did or were contemplating doing was not right.   I have served twice in Bishoprics, and each time, those Bishops saw as part of the roles of their counselors to help point out when they were making mistakes.   That was part of sustaining them in their callings.   As their counselor, if I had allowed them to do something wrong and fail just because I was being obedient to every they thing they thought, I would not have been magnifying my calling to sustain and support them.

So coming full circle to the question of morality v. obedience, always choose morality.   Yes, usually choosing one means choosing the other, but there are times when you are forced to choose between the two.   In those cases, it takes great courage to choose morality over obedience.   I prefer to use the phrase of our Hymn: "Choose the right, when a choice is placed before you"   Yes, choosing the right might mean to disobey, but that is the example that our Savior taught.  He railed against the Church Handbook of His day that the Pharisees so diligently enforced.  Rather Jesus chose to do what is right, disboeying the priesthood leaders of his day and setting the example for righteous living for the rest of us to follow.  Imagine how different the story of Christ would be if he was obedient in every way to the High Priests and Pharisees who were the Priesthood Leaders of his day and as was expected of all Jews "in good standing."  How grateful I am that Jesus Christ himself chose morality over obedience.